Our Path to Excellence is Expanding!

In 2011, High Valley Arts began a fundraising effort in our new Outdoor Summer Theater to help us make improvements on the site.  For a $125 donation, patrons could have a brick on our Path to Excellence in the Arts, which was located right in front of the stage.  The path has grown steadily.

Patrons can chose the words to be engraved on their bricks, including their own names, the names of their children, or their cats, or their birds, or whatever they wish. 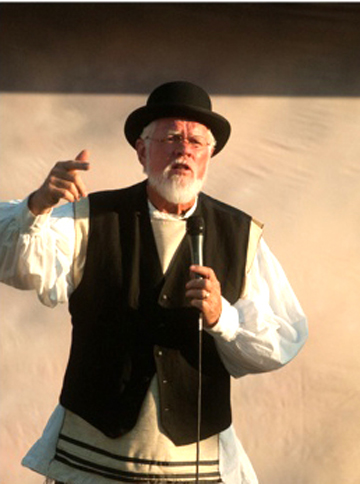 Avram the Book/Brickseller hawking bricks during “Fiddler on the Roof” July, 2012.

In July of 2012 during our Fiddler on the Roof production, Stuart Waldrip who played Avram the Bookseller in the show became Avram the Brickseller during intermission.  Each night he held a contest to see how many bricks people would add to our Path and each night was better than the evening before.

This year, for our 2013 production of Music Man, production, Avram the Brickseller became Oliver Hix, the Brickseller.  He was enormously successful and sold 100 bricks.  Thanks for the generosity of our patrons, the size of our Path to Excellence doubled this year.

We are very grateful to our brick donors.  Since we are a non-profit organization staffed completely by volunteers, all the funds from these bricks will go to upgrading our outdoor theater and adding new equipment so we can continue to bring a high level of artistic excellence to our beautiful Midway mountain community. We invite YOU to become one of our brick donors next summer.

Our growing Path to Exellence